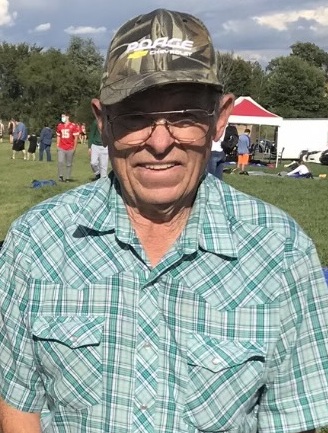 Please share a memory of John to include in a keepsake book for family and friends.
View Tribute Book
Funeral Services for John Julius Simmons, Jr. of Elsberry, MO will be held at 11:00 a.m. Friday, June 3, 2022 at the Asbury United Methodist Church near Foley, MO. Rev. Rod Ohmes, pastor of Ramsey Creek Baptist Church, will officiate with burial in Asbury Cemetery near Foley. Serving as pallbearers will be Arthur Hammel, Caden Simmons, Jordan Simmons, Ted Simmons, Paul Eggering and Jimmy Lovelace. Mr. Simmons, 79, passed away Wednesday morning, May 25, 2022, at his home near Elsberry. Born January 12, 1943 in Troy, MO, he was the son of John J. and Olevia Dodson Simmons. John was a 1961 graduate of Troy Buchanan High School in Troy, MO. Growing up, John loved sports, and was a natural in everything he did. He loved playing baseball and basketball. He was a member of the Troy Buchanan team that finished 2nd in the 1960 State Basketball Championship. He was united in marriage in May 1962 at Asbury Methodist Church near Foley, MO to Anna Lee Taylor. This union was blessed with two sons, Russell Lee “Rusty” and John Richard “Ricky”. John played hardroad baseball for several years with the Troy and Silex teams. He also enjoyed the late model racing circuit. In the late 70s and early 80s, he played slow-pitch softball in Elsberry. John was employed for many years as a crate packer at McDonnell-Douglas (now Boeing) Aircraft manufacturer in St. Louis, MO, retiring in 2006. John and Ann bought their farm in the early 1980s and have lived and farmed the property for 40 years. John loved his family and friends, and enjoyed watching his children and grandchildren participate in their many activities. In the last several years, John was a devoted husband who took special care of Ann. His love and dedication to Ann was a picture of Christ’s love. He was a blessing to each one God placed in his life. Many have said they will long remember John by his distinctive laugh. He was preceded in death by his parents, John and Olevia Simmons; one brother, Robert “Bob” Simmons; and two brothers-in-law: Russell Eggering and Ralph Nobles. Survivors include his beloved wife of 60 years, Ann Simmons of Elsberry; their two sons: Russell Lee “Rusty” Simmons and his wife, Shellie, of Eolia, MO, and John Richard “Ricky” Simmons of Elsberry; and four grandchildren: Arthur Hammel and his wife, Caitlyn, Sophie Simmons, Caden Simmons and Jordan Simmons. He also leaves three siblings: Gerry Kay Eggering of Old Monroe, MO, Joe Simmons and his wife, Joyce, of Troy, MO, and Debbie Braun and her husband, Bill, of O’Fallon, MO; one sister-in-law, Theresa Nobles of Nixa, MO; several nieces, nephews, other relatives and many friends. Visitation will be held from 9:00 a.m. until time of the Funeral Service at 11:00 a.m. Friday, June 3, 2022 at Asbury United Methodist Church near Foley. Memorials may be made to Shriners Hospital, to St. Jude Children’s Hospital or to Gideons International in care of Carter-Ricks Funeral Home, 107 S. 5th Street; Elsberry, MO 63343. Online condolences may be made at www.carterricksfuneralhome.com
Friday
3
June