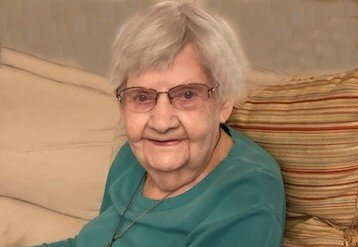 Please share a memory of Betty to include in a keepsake book for family and friends.
View Tribute Book
Funeral Services for Betty June Ruegg of Elsberry, MO will be held at 1:00 p.m. Saturday, February 26, 2022 at Carter-Ricks Funeral Home in Elsberry. Rev. Floyd Gudde, pastor of the Elsberry United Methodist Church, will officiate with burial in Elsberry City Cemetery in Elsberry, MO. Mrs. Ruegg, 94, passed away Friday morning, February 18, 2022, at SSM St. Joseph Hospital West in Lake St. Louis, MO. Born August 3, 1927 in St. Louis, MO, she was the daughter of Delbert Duncan and Ruby Thomas Omohundro Marling. Betty was a 1945 graduate of Elsberry High School. She was united in marriage on June 18, 1950 in St. Louis, MO to Richard J. Ruegg. This union was blessed with one son, Robert. After Richard’s service in the Army, they lived in Cape Girardeau, MO where he earned a degree in Business Administration from Southeast Missouri State University in 1960. Richard and Betty lived in Independence, MO from 1961 until 1982 when they moved to Denver, CO. Over the years, Richard and Betty were very active in the Vintage Thunderbird Clubs of America and the Rocky Mountain Thunderbird Club of Denver. Following Richard’s death in 2017, Betty returned to Elsberry where she has made her home for the last four years. She attended the Elsberry United Methodist Church. She was preceded in death by her mother, Ruby Marling, her father, Delbert Marling and her step-mother, Helen Marling; and her beloved husband of almost 67 years, Richard Ruegg who died April 14, 2017. Survivors include their son, Robert L. Ruegg of Denver. Betty also leaves two sisters: Mary Fortney-Smith of Indianapolis, IN, and Kathy A. LaRue and her husband, Dan, of Dittmer, MO; three nephews, two great-nieces, four great-nephews, other relatives and many friends. Visitation will be held from 11:00 a.m. until time of the service at 1:00 p.m. Saturday, February 26, 2022 at Carter-Ricks Funeral Home in Elsberry. Memorials may be made to Elsberry UMC or to the Joseph R. Palmer Memorial Library in care of Carter-Ricks Funeral Home, 107 S. 5th Street; Elsberry, MO 63343.
Saturday
26
February

Share Your Memory of
Betty
Upload Your Memory View All Memories
Be the first to upload a memory!
Share A Memory
Send Flowers
Plant a Tree