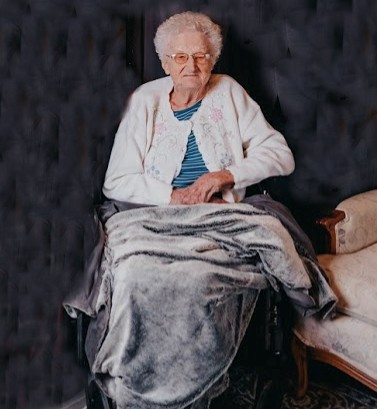 Please share a memory of Esther to include in a keepsake book for family and friends.
View Tribute Book
Funeral Services for Esther Louise Taylor of Elsberry, MO will be held at 2:00 p.m. Tuesday, December 21, 2021 at Carter-Ricks Funeral Home in Elsberry. Rev. Rod Ohmes, pastor of Ramsey Creek Baptist Church in Clarksville, MO, will officiate with burial in Elsberry City Cemetery in Elsberry, MO. Mrs. Taylor, 93, passed away Wednesday evening, December 15, 2021, at her home. Born June 19, 1928 in Clarksville, she was the daughter of Karl Frederick Johanon and Elizabeth Emma Rupsch Rathjen. Esther worked over the years at the Appleshed, Airwick, as a secretary, and as a farmer’s wife. She was united in marriage on January 3, 1953 in St. Louis, MO to Charles Hunter Taylor. This union was blessed with two children: Ralph and Elizabeth. Esther loved to quilt and made clothes for all the children in her life. She was preceded in death by her parents, Karl and Elizabeth Rathjen; one son, Ralph “Rooster” Taylor; and her beloved husband of 28 years, Charles Taylor, who died on October 19, 1981. Survivors include her daughter, Elizabeth Taylor of Paynesville, MO; and two grandchildren: Amber Bredenkoetter and her husband, Dan, and Amy Taylor. Esther also leaves four grandchildren: Nick, Tyler, Ryan and Nathan; two great, great-grandchildren: Waylen and Sylvia; and many friends. Visitation will be held from 12 noon until the time of Funeral Services at 2:00 p.m. Tuesday, December 21, 2021 at Carter-Ricks Funeral Home in Elsberry. Memorials may be made to the Elsberry City Cemetery in care of Carter-Ricks Funeral Home, 107 S. 5th Street; Elsberry, MO 63343.
Tuesday
21
December

Share Your Memory of
Esther
Upload Your Memory View All Memories
Be the first to upload a memory!
Share A Memory
Send Flowers
Plant a Tree