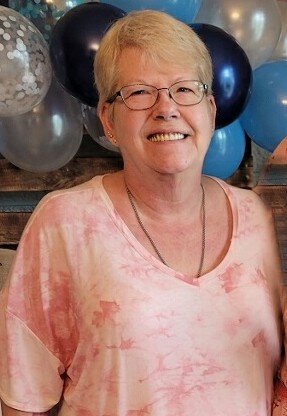 Please share a memory of Barbara to include in a keepsake book for family and friends.
View Tribute Book
Funeral Services for Barbara Elizabeth Tillotson of St. Louis, MO will be held at 2:00 p.m. Sunday, August 22, 2021 at Carter-Ricks Funeral Home near Winfield, MO. Rev. Kris Hagemeier, pastor of Elsberry First Christian Church, will officiate with burial in New Salem Cemetery near Winfield. Mrs. Tillotson, 66, passed away Thursday morning, August 19, 2021 at St. Louis University Hospital in St. Louis. Born April 11, 1955 in Florissant, MO, she was the daughter of William Virgil and Bessie “Betty” Cresswell Seitz Birkhead. She was a 1973 graduate of McCluer High School in Florissant. Barbara was united in marriage on February 2, 1974 in Florissant to Patrick Francis Tillotson. This union was blessed with two children, Jeremy and Janet. Early in her career, she worked as a CNA at St. Sophia Nursing Home in Florissant. She then worked for many years as a lighting consultant at Metro Lighting in St. Louis. She later worked as a store clerk for Office Max. Barbara was a former member of Florissant Presbyterian Church. She is preceded in death by her father, William “Bill” Birkhead; and one grandson, Justin Tillotson. Survivors include her beloved husband of 47 years, Patrick “Pat” Tillotson of St. Louis; one son, Jeremy Michael Tillotson and his wife, Christina, of Olathe, KS; one daughter, Janet Marie Raines and her husband, Michael, of Moscow Mills, MO; three grandchildren: Alexander, Kayla and Erralynn; and one great-grandchild, Dillon. She also leaves one brother, Stephen Birkhead and his wife, Patricia “Patty”, of Moscow Mills; two sisters: Candace “Candy” Duggan and her husband, Edward, of Littleton, CO, and Sarah Kohl of Jefferson City, MO; several nieces, nephews, other relatives and many friends. Visitation will be held from 12:00 noon until time of the service at 2:00 p.m. Sunday, August 22, 2021 at Carter-Ricks Funeral Home near Winfield. Memorials may be made to American Cancer Society in care of Carter-Ricks Funeral Home; 3838 East Highway 47; P.O. Box 253; Winfield, MO 63389.
Sunday
22
August