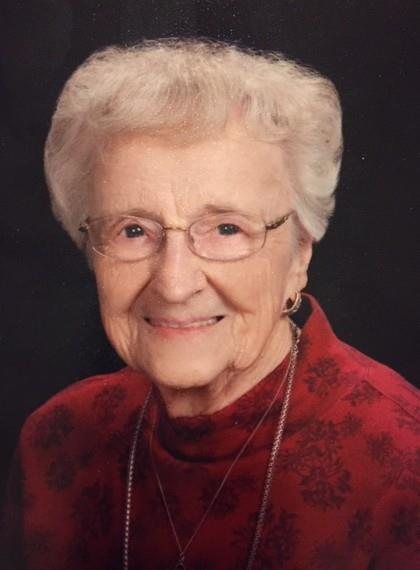 Mrs. Freese, 97, passed away Sunday afternoon, January 13, 2019 at her home in Winfield.  Born November 29, 1921 in Winfield, she was the daughter of Albert William and Rachel Amy Cannon Beckemeier.  Mary was a 1939 graduate of Winfield High School.  She was united in marriage on September 16, 1939 in Winfield to Ernest William Freese.  This union was blessed with two children: Darryl and Patricia.  In her earlier years, Mary worked as a seamstress for the Angelica Garment Factory.  Mary worked as the secretary for the Winfield R-4 School District for 15 years.  She was a longtime member of St. Paul U.C.C. where she was a Sunday School Teacher, member of the church choir, and member of various church committees.  Mary loved quilling, sewing, and caring for her flowers and garden.

She was preceded in death by her parents, Albert and Rachel Beckemeier; two brothers: Wendell and Denzel Beckemeier; and her beloved husband of nearly 65 years, Ernest Freese, who died October 18, 2004.

Share Your Memory of
Mary
Upload Your Memory View All Memories
Be the first to upload a memory!
Share A Memory
Send Flowers