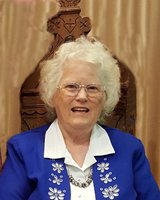 Funeral Services for Evelyn Poplin Hammond of Elsberry, MO will be held at 2:00 p.m. Tuesday, June 1, 2021 at the Elsberry First Christian Church. Rev. Kris Hagemeier, church pastor, will officiate with burial in the Elsberry City Cemetery near Elsberry. Serving as pallbearers will be Dave Robbins, Dean Tapley, Ken Harris, Ronald K. Vaughn, Ronnie Vaughn and Mel Norton; and honorary pallbearer will be Dale Hurley. Mrs. Hammond, 78, passed away Thursday evening, May 27, 2021 at her home near Elsberry. Born June 21, 1942 in Dermott, Arkansas, she was the daughter of J. T. and Leona Wagoner Poplin. Evelyn was a 1961 graduate of McGehee, AR High School. She was united in marriage on April 22, 1967 in McGehee to Terry Wynn Hammond. This union was blessed with two children: Terry Wynn II and Kenny Lynn. Evelyn worked in stock prep for Dillard's, retiring on May 12, 2004. She was a member of the Elsberry First Christian Church. Evelyn was preceded in death by her parents, J.T. and Leona Poplin; and one brother, Calvin Poplin. Survivors include her beloved husband of 54 years, Terry Hammond of Elsberry; their children: Terry Hammond II, and his wife, Dana, and Kenny Hammond, also of Elsberry; one grandchild, Lakyn LaSha Hammond; and one great-grandchild, Jodi Riley Hammond. Evelyn also leaves one brother, Jerry Poplin and his wife, Martha, of Cabot, AR; two sisters: Gail Bunchfield and her husband, Archie, of Crossett, AR and Theresa Allison, also of Crossett; many nieces, nephews, other relatives and friends. Visitation will be held from 10:00 a.m. until the time of Funeral Services at 2:00 p.m. Tuesday, June 1, 2021 at the Elsberry First Christian Church. Memorials may be made to the Family of Evelyn Hammond in care of Carter-Ricks Funeral Home, 107 S. 5th Street; Elsberry, MO 63343.