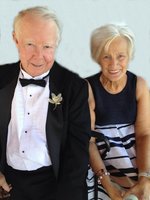 Fortified with the Sacraments of Holy Mother Church, Vince together with his beautiful wife Mary, both 82, surrounded by their nine children, let go of this life peacefully, to enter heaven together on November 8, 2020. They passed within a few hours of one another; their life and 63-year marriage was a true love story. Vince, nicknamed “Nap”, was born in Kansas City, MO. He moved to St. Louis and boarded at Chaminade College Prep in 1948. Mary, nicknamed “Bobbie”, was born in St. Louis and attended Visitation Academy. The pair met in high school, fell in love, got married, and started their family. Vince began his career at McDonnell-Douglas. Bobbie stayed at home with their growing family, raising their children, so Vince could attend night school at St. Louis University where he received his degree in accounting. A lifelong friend, Harry McKee hired Vince at his company, and eventually helped him launch his own accounting and tax service business, Nangle and Associates, Inc. In 1969 Nap and Bobbie moved their growing family to St. Charles, where they were active parishioners in St. Joseph’s Catholic Church and St. Dominic High School. After raising their children, they bought a second home in Arizona, where they spent much of their time golfing and traveling with their beloved friends. A few years ago, Bobbie was diagnosed with dementia. Nap was diagnosed with terminal cancer this past spring. With the excellent help and support of Hospice both spent their final days at home together hugging, kissing, and holding hands. All nine of their children were able to be at their side as they said goodbye to two incredible parents who gave them life and a lifetime of good memories. We love and miss you. The couple are survived by their son and eight daughters; Paul (Deb) Nangle, Kim (George) Bennett, Linda (Barry) Gnade, Mary (Alan) Stahlschmidt, Michelle (Greg) Asbury, Louise (Tom) Birkenmeier, Laura (Tom) Stewart, Meg (John) Pisani, & Julie (Greg) Fix. Nap is survived by brothers, John (Pat-deceased) Nangle, Jerry Nangle & Sue Lehmann. Bobbie is survived by her sister and brother in law, Barbara and James McKelly and was preceded in death by her sister Helen Phelan. They are also survived by 25 grandchildren and 18 great grandchildren. A private Funeral Mass will be held on Friday, November 27, 2020 at St. Elizabeth Ann Seton Catholic Church; and Vince and Bobbie’s final resting place will be Calvary Cemetery, St. Louis. Memorial Donations may be made to The Alzheimer’s Association, American Cancer Society (or) American Diabetes Association.